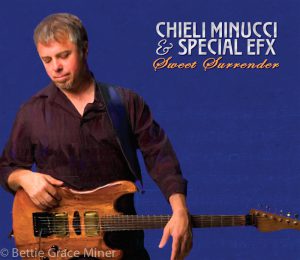 
how to purchase:
If you’d like to purchase an autographed CD,
e-mail us at [email protected]
or
visit CD Baby
click here

I wrote this piece specifically for the group, Guitarzz (myself, Chuck Loeb, and Paul Jackson Jr), for our performance at the Capitol Jazz music festival in the Washington, DC area. I always wanted to try to write a song which somehow crossed the style of the Allman Brothers with contmeporary jazz. Anyway, somehow this was the result, with me ending up performing the 3 guitar parts.

This is actually a spinoff of an old Special EFX tune from our 2nd year as a band (1985), but completely rewritten, as well as totally rearranged. I wanted to write something ‘commercial’ , yet which was extremely syncopated as well, and funky, and with a catchy melody. This tune always had been in the back of my mind to recut with a more modern arrangement.

A longshot cousin to ‘Courageous Cats’, from solo CD #1, ‘Jewels’. Astralcats is all about cruising through time and space, at a high speed! A bunch of fusion cats are joined onstage by a jazzy bop nerd, and the results are just crazy!

The acoustic guitar based arrangement was inspired by guitarist Eric Clapton’s collaboration with crooner Babyface some years ago. A touch of melancholy, but my idea of what contermporary instrumental ‘pop’ should sound like…

After we videotaped our live DVD in 2005 I became inspired to record a few more songs which would feature the band cut loose….live in the studio. This is one of those, a fast, light composition, jet-propelled by Lionel’s precise percussive work…

Philip Hamilton’s haunting spiritual vocals inspired the arrangement for this gorgeous epic! The vocal arrangement was originally used for a musical Philip had scored, ‘River Deep’, which ran off-off Broadway in NYC in 2005 & 2006. I took those vocal melodies and moved them around a bit, then added everything else around them.

Oh Lord, I did what you told me
But I’m only a man
and I believe what I see
Oh…

Oh lord, looks like it’s crazy
I know you got a plan, yeah
and I wait patiently…..
Oh Lord

This piece originated at a soundcheck from a tour last year in Detroit. We needed a mid-temp groove to test the stage levels, and these 4 chords just did the trick! Later on I remembered those harmonies which inspired this melody! I also wanted to dress it all up as if it was a Pink Floyd kind of piece, slow, yearning, crying…

Originally written with lyrics in mind, this piece is reminicient of the spirit of some of the music on my solo CD from some years back, ‘Renaissance’.

Jerry and I have been playing this ditty at almost all of our live concerts for a while now. I thought it was time to finally get it recorded in the studio. We often perform this as part of our ‘jazz fusion medley’.

This is in honor of my hometown’s annual ‘Children’s Day’ neighborhood celebration in Forest Hills, Queens, when Greenway North & Greenway South are closed off and the streets become a kind of kid’s carnival every first Saturday in June! As a teenager I performed here with my first junior high school band, year after year. The recording features many musicians, and many instruments…a real ‘classic’ Special EFX kind of world party piece!

Another live band song, inspired by the Special EFX DVD performance. There is a lot of play with rhythm figureshere…hemiolas within hemiolas…

I met Wayne performing together in ‘River Deep,’ a staged musical adaptation of Tina Turner’s life story, performed in NYC over the last 2 years. The idea was to record an upright bass and acoustic guitar, old fashioned style, no overdubs, no click track.

Love Is Always Young (from Got It Goin’ On) // Chieli Minucci